NCEI is transitioning to a new website and paths to data resources will be changing. Please contact NCEI.Info@noaa.gov with any questions of issues. See the new website at www.ncei.noaa.gov.

Data collection efforts for the Deepwater Horizon Oil Spill Response were performed by numerous organizations including private industry, Federal and State agencies, and academic institutions. In many cases, these organizations compiled the data in databases as complete data sets. These data include CTD casts, towed fluorometry, onboard measurements from hydrocarbon sensors, GCMS, Laser In-situ Scattering Transmissometers, and laboratory analysis of collected samples. Data and documentation are available from the links below.

This collection includes 4 data files (one each for water, sediment, tissue, and tar/oil analyses) containing data from the Deepwater Horizon (DWH) Oil Spill Event Response Phase. These data are the work of Federal agencies, state environmental management agencies and BP and its contractors. This dataset represents the culmination of a quality-control process overseen by NOAA and involving each individual data provider. These data were originally uploaded by the data providers into the EPA Scribe data management system (see Scribe Database Collection, this page), and later transferred to NOAA’s Query Manager system for final evaluation by NOAA. The files in this collection are extractions from Query Manager. This dataset is considered to supersede the Scribe Database Collection. 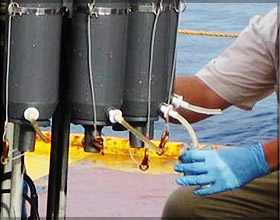 In response to the Gulf of Mexico oil spill, scientists from the Commonwealth Scientific and Industrial Research Organization (CSIRO) conducted on-site monitoring of dispersed oil at the request of BP. 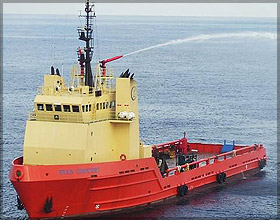 At the request of the United States government and BP, research scientists and technicians from the Centre for Offshore Oil Gas and Energy Research (COOGER), Fisheries and Oceans Canada (DFO) conducted at-sea monitoring operations with other scientific experts on board vessels R/V Brooks McCall and R/V Ocean Veritas. From May 8 through August 24, 2010 the DFO COOGER team maintained a continuous monitoring program that recovered a total of 3197 unique water samples from 404 stations at depths down to 2000 m for analysis of dispersant effectiveness by characterizing oil droplet size and UV-fluorescence. This collection of data is organized into nine database tables which include all data used by COOGER to conduct analyses. These data include: 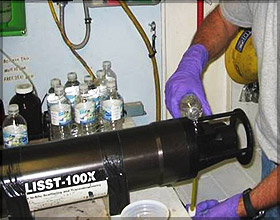 The Scribe Database Collection includes 14 databases containing data from the Deepwater Horizon (DWH) Oil Spill Event Response Phase. These databases are the work of Federal agencies, state environmental management agencies and BP and its contractors. The types of information include locations, descriptions, and analysis of water, sediment, oil, tar, dispersant, air and other environmental samples. Note: the water and sediment chemistry data from these databases has been extracted by cruise and archived separately in association with the other cruise-related data accessions. See the DWH Ocean In Situ Data page for access to those accessions.

The Deepwater Horizon Joint Analysis Group (JAG) for Surface and Sub-Surface Oceanography, Oil and Dispersant Data was a working group with membership from federal agencies, BP, and academia that was formed to analyze sub-surface oceanographic data being derived from the on-going coordinated sampling efforts by private, federal and academic scientists as part of the spill response. The goal of the JAG was to provide comprehensive characterization of the Gulf of Mexico sub-surface conditions as well as the fate and transport of dispersed petroleum as a result of the Deepwater Horizon oil spill. JAG findings were published in a series of reports for the Unified Area Command as well as the public. This accession contains Total Petroleum Hydrocarbon and Volatile Organic Analysis data from laboratory analysis, as well as in situ Chromophoric Dissolved Organic Matter and dissolved oxygen data. This dataset was compiled as part of the final JAG summary report, and referred to in Appendix 3 of that report, NOAA Technical Report NOS OR&R 27 (2012). 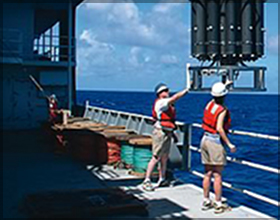 What is a CTD? A Conductivity-Temperature-Depth (CTD) is an ocean instrument that has a combination of a pressure sensor (measured pressure is converted to depth), a resistance temperature measurement device (usually a platinum thermometer), and a conductivity sensor used to estimate salinity. CTDs are usually mounted on a metal frame and lowered through the water column suspended from a cable. Example CTD Plot.

What is an XBT? An eXpendable BathyThermograph (XBT) is a probe that is dropped from a ship and measures the water temperature as it falls. A very thin wire transmits the temperature data to the ship where it is recorded for later analysis. The probe is designed to fall at a known rate, so that the depth of the probe can be inferred from the time lapsed from launch.

What are ADCP/LADCP? The Acoustic Doppler Current Profiler (ADCP) measures currents beneath a ship while under way. Sound signals sent from the moving ship bounce back to receivers aboard the ship. This provides a profile of water movement relative to the ship-precise modern navigation, allowing the ship's motion to be subtracted from the data. These devices are also used on moorings and profilers and, along with acoustic backscattering, measure animal biomass. Particles in the path of the sound waves, mostly plankton, reflect a small part of the sound energy back toward receivers, allowing researchers to make remote estimates of the sizes and numbers of animals present in the water column. The Lowered Acoustic Doppler Current Profiler (LADCP) is an ADCP which can be lowered on a cable from the surface.

What is a Hydrocarbon Sensor Array? The Hydrocarbon Sensor Array is a sensor platform developed by the Commonwealth Scientific and Industrial Research Organisation (CSIRO), Australia's national science agency, for detecting different types of hydrocarbons at varying sensitivities, and in real time. The platform consists of a number of hydrocarbon sensors assembled to produce a highly sensitive and discriminatory hydrocarbon sensor capability designed to detect and differentiate hydrocarbons in a marine environment. The platform enables environmental monitoring, studying of ocean changes and the measurement of human impacts on marine environments.

What is a LISST? A Laser In Situ Scattering and Transmissometer (LISST) measures the size distribution of particles 5 to 250 microns in diameter. LISST generates diagrams of the size distribution of particles and small aggregates in the water column without disturbing them by collecting them in water bottles. Particles' sizes influence their optical properties and settling dynamics, but many of the aggregates fall apart in water bottles before they can be returned to the lab and measured.

What is a MOCNESS? A Multiple Opening/Closing Net and Environmental Sensing System (MOCNESS) is a net system for measuring plankton in the ocean. The MOCNESS is towed behind a research vessel at low speed and consists of numerous nets of varying mesh sizes. Each net can be opened and shut independently so that it samples a discrete patch of water. The net enables biologists to catch zooplankton and nekton in various depth horizons typically anywhere in the upper 500 m of the oceans. There is also an array of sensors mounted on the instrument frame that relays water conditions up to the ship in real time, typically including CTD, PAR (photosynthetically available light), transmissometry and fluorescence sensors. The sensor data help researchers match what they find in their samples to the physical properties of the seawater.

What is a MVP? The Moving Vessel Profiler (MVP) is a multi-purpose instrument for aiding in the collection of both shallow and deep water data sets. The MVP's primary function is to allow accurate data collection without the need to stop the vessel. The system includes a smart winch and deployment system which is completely autonomous and can be controlled by computer without the requirement for personnel on deck. Sensors that have been used with the MVP system include sound velocity, CTD, Laser Optical Particle Counter (LOPC) and fluorometer.

What is a SCS? The Shipboard Computer System (SCS) is a system that collects, processes, displays and stores data from the navigational and scientific sensors on NOAA ships. NOAA developed this system to modernize and standardize data collection on its primary ocean and coastal research vessels. The number and type of sensors vary according to each ship and its particular mission, but they commonly include oceanographic, atmospheric, navigational, and fisheries data instruments. Selected data from the SCS are sent electronically to NOAA data centers where they are integrated in weather and sea-state forecasts, and archived for distribution to the public.